We are fortunate men.  We play a kid’s game at our ripe old age.  We have spouses and significant others who recognize what this game and its camaraderie does for our collective mental health.  We are fortunate, men.

I’m fortunate to be a member of 2 championship teams in the MABL of Southern Wisconsin this year, and don’t think for a second that I take these things for granted.  I may be a creative writer, but I am also a reflective thinker.  I appreciate the efforts that all have put in to get themselves to this week of October baseball in Southern Wisconsin.  And on that note, here is your review of the 45+ division championship in the MABL of So Wis.

It was an absolutely glorious day for baseball in Southern Wisconsin at EMLL Senior Field.  October 2 was the date, which if you are scoring at home, has historically included days of 22 degree snow flurries and 87 degree scorchers, depending on the year. Also, if you are scoring at home, good for you.  You’re obviously doing something right.  Or left.  You know who you are.  Today’s 71 degree high was welcome.

The 10-3 Crawfords faced off against the 11-1-1 Sand Crabs in the championship round of the 45+ division of the MABL of So Wis.  The Sand Crabs were looking to retain the championship trophy for their 6th straight year.  The weather was beautiful, as was the game.  Sit back, relax, and take this all in…

On the mound for the visiting Craws was right-hander Jeff Adas.  In his previous outing vs the Sand Crabs, he had imposed his will and handed the Crabs their first and only loss of the season, baffling the bats of the clawed crusaders.  He would be battling against Mike Wallace, a prior SPOG of the highest caliber in this season-ender.

Both teams went quietly in the first and second, and the Crawfords struck first in the top of the 3rd.  SS Andy Winn reached on a scorcher off SS Mike Schoonveld’s glove/knee. He advanced to second when 2B Shad Fanta was hit by a pitch, and  a single by CF Rob Grether loaded the bases. A liner to center resulted in Fanta being doubled off second but a double steal allowed Winn to race home for the first run, but that was it for their half of the third. The Crabs hit back for 3 in the bottom of 3, after Ward “Havoc” Paxton was struck by an errant pitch.  He advanced to second on a single to left by CF Steve Hill, and advanced to third on a single by C Chris McGill.  Bases juiced.  Crabs SS Mike Schoonveld walked for a ribeye to score Paxton, then 3B Jake Kas stroked a single that scored Hill and McGill.  3-1 Crustaceans.

In the 4th, the Crawfords tied things up in this see-saw battle. 3B Mike Starshak led things off by reaching on an error, but was gunned down by McGill when he attempted thievery of second.  Crawfords RF Keith Richley singled, then scored on an Adas home run bomb to the left center gap.

The bottom of the 4th would see the Sand Crabs pinch another one off to go up by one.  2B Troy Galson singled, stole second, and scored on a single by 3B Tim “Mackles” McInernay.  4-3 Crabs.

In the 5th and 6th, Wallace shut down the intrepid Crawford lineup with 1-2-3 innings, whilst the Sandies got one more on a double to right by outfielder Barry Davis, who scored momentarily on a seeing-eye single by Hill that barely evaded the reach of the fleet-of-foot shortstop Winn.   Hill tried to get greedy on the throw to the plate but was thrown out trying to advance to second by Crawfords catcher Paul Meyer.  5-3 Sand Crabs.

In the top of the 7th, the Crawfords struck back for 2 to tie things at 5, on singles by Adas and LF Steve Kilberg, along with a fielder’s choice by Winn and a single by Fanta that scored Kilberg.  Meyer then flew out to left with Winn scoring from third on the sac fly.  The bottom of the 7th saw the Crabs get back two.  Galston singled and stole second, then scored on a double by Wallace.  Jason Himebauch then reached on an error.  OF/2B Randy Olivares singled to knock in Wallace, and an errant throw to the plate sent Himebauch plateward, where he was intercepted by a Jeter-like hustle play by Craws first baseman Sean Michael Dargan who fielded a throw and tagged Himebauch out.  7-5 Crabs.

In the 8th, Crabs reliever Schoonveld started out with a rather rough inning.  Starshak walked.  Richley doubled to deep right to score Starshak.  Dargan was hit by a pitch, as was Adas who followed.  Kilberg K’d  for the first out, then Winn hit into a fielders choice that got Richley at the plate, and Fanta grounded to the pitcher to end the threat. 7-6 Crabs. Schoonveld’s sigh of relief could be heard above the noise of planes landing at MSN.

The Sand Crabs were held scoreless in the bottom of the 8th by reliever Grether, and Schoonveld shut the door in the top of 9 by striking out Grether, then displaying some cat-like quickness while fielding a line drive off the bat of DH Dan Ketter, then doubling up Meyer who had walked.

Game over.  7-6 Crabs final.  What a game.  Both teams quenched their respective thirsts at Slices, and there is no doubt they are out of Schlitz.  Fun times were had discussing the game and an upcoming joint effort in two weeks when the MABL of Southern Wisconsin sends a team of its finest to Phoenix to participate in the 50+ World Series.

See you next season!! 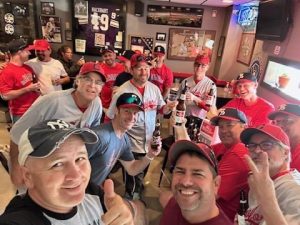 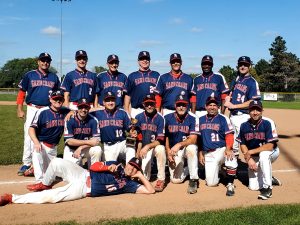 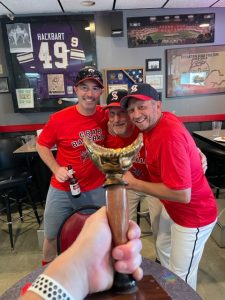 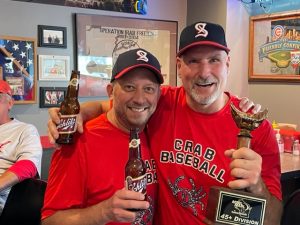 It was an overcast and misty day on Sunday, September 25th when the 10-1-1 Sand Crabs faced off against the 3-10 Orioles in the second round of the 45+ MABL of Southern WI playoffs.  The Orioles were fresh off their 18-9 play-in victory over the Grays a week before, while the Sand Crabs hadn’t played in over a month due to forfeits, holidays, and crappy weather.  In fact, they had played only two games since July 31st.  That is 2 games in 8 weeks for those of you scoring at home.  And if you are scoring at home, good for you.

The crustacean curmudgeons had bested the pumpkin colored chirpers by a score of 67-4 in their 3 prior matchups this year.  But this one would be different…..waaaaaayyyyy different.  The Orioles have solidified their lineup a bit, to say the least.

Randy Gaber started on the mound for the home Crabs, whilst grizzled veteran Steve Waugh threw for the visiting birds.  In the first, the Orioles pecked ferociously at the eyes of the Crabs, scoring 3 on a single by Paul Orlowski that knocked in John Kuehl who had reached on an error. Then, if I remember clearly, Jeremy Johnson spoke in class today and bombed a 2 run dinger over the right field fence.  The next two batters were retired.  The Crabs came back for 2 in the bottom of 1 when CF Steve Hill took a free pass and went to third on an errant pick off attempt by the O’s catcher.  Chris McGill then knocked in Hill and scored moments later on a single by Mike Schoonveld. 3-2 O’s

In the second, there were no hits by the Orioles, and a double by Crabs Mike Wallace, but no runs were plated.  The top of the third for the orange tweeters saw two runs scored on 6 consecutive hits by Justin Disch, Aaron Meyer, John Kuehl, Orlowski, Johnson and Waugh, but the Sandies defense took advantage of an unorthodox 6-4-5 double play to minimize the damage. 5-2 birds.

The O’s got another in the 5th, and 3 more in the 7th.  9-2 Orioles. However, there was a defensive play that retrospectively seemed to spark the Crabs toward the end of the top of the 7th, when LF Barry Davis gunned down a would-be-scorer at the plate on a laser-accurate missile launch from his chiseled left arm.  9-2 Orioles.  It seemed things were not looking good for those with claws, despite this defensive gem.

But, you know what? The Sand Crabs are a team that doesn’t get too down when things go bad.  Sure, they may tighten their sphincters a bit now and then and walk a little funny, but who doesn’t?

In the bottom of the 7th the pot was boiling, but the Crabs said “Nay! Hold the Old Bay!”  Gaber singled, Schoonveld singled, utility man Jim Pliner walked, and 3B Jake Kas doubled to score 2. 9-4 O’s.  2B Troy Galston singled, scoring Pliner. 9-5 O’s.  Relief Pitcher Wallace singled to load the bases, and then Jason Himebach walked to score another.  9-6 O’s.  Randy Olivares then singled to plate yet another Crab run. 9-7 Orioles.  Ward “Havoc” Paxton then confidently strolled to the dish, muttering under his breath about something or other, and proceeded to stroke a single through the middle to plate Wallace.  9-8 birds.  Himebach then raced home on a wild pitch to tie things up at 9.  Then, with one out, Tim MacInernay launched a sacrifice fly to center, and Olivares sped home to score on Mac’s Sac.

Wallace and the Crab’s D shut down the birds’ bats with a 1-2-3 top of the 8th, bringing the Crabs to bat in their half with only 4 minutes of time remaining before the no-new inning time limit was reached.  McGill singled, Gaber walked, and Schoonveld walked, and that was it.   Time up.

McGill led the Crabs with 3 hits, while Gaber, Schoonveld, Galston, and Wallace had 2.  Kuehl and Orlowski had 3 each for the Orioles, and Johnson had 2, or so it seems from our tattered scorebook which was stolen by a rabid raccoon in the parking lot, so apologies for any errors.

Thirsts were quenched at Slice’s, and some mud was even slid.  Thanks Packers!

The Sand Crabs will battle the Crawfords for the 45+ League Championship next week.  Be there!  What else you got going on?